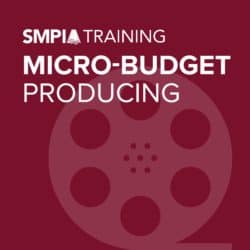 Dig into the nuts and bolts of what it means, and what it takes to makelow budget independent feature films in today’s landscape.

This workshop will be broken down into these 5 sections:

The Script is Ready, Now What?
How to get key creatives and funders to rally behind your film and get you from script to production

Surviving the Shoot
You’ve made it to the start of the race. How to navigate the pitfalls and take advantage of any good luck.

How Do I Get People to See It?
You finished shooting the movie but the real work has only just begun.

What’s next?
Your movie has played the festival circuit, been released, sold to VOD and streaming platforms. Now what?

Instructor Alyson Richards’ latest produced feature ‘Don’t Talk to Irene’ was picked up for a theatrical release in Canada and the U.S. The film premiered at TIFF 2017 and won both the audience and jury awards at the Austin Film Festival. Other films include the dark comedy ‘Guidance’ (TIFF, New York Times Critic Pic, Netflix), and the feature documentary ‘Quality Balls’ (Hot Docs, Showtime, HBO Canada).

When & Where:
Saturday, November 17 from 10am – 5pm at the Regina Soundstage